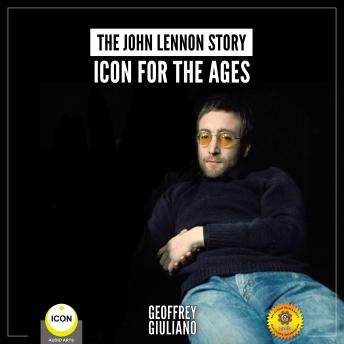 The John Lennon Story - Icon for the Ages

In this original production, the real John Lennon is revealed through the insightful narration of Beatles historian Geoffrey Giuliano. Lennon was a complex man whose incredible body of work often obscured the sensitive, fragile man behind the music.
Since his violent death in 1980, Lennon has become an almost fictional character; a hippie prince of peace, an idealized icon, a romanticized caricature. Along the way, the authentic John Lennon has been all but lost. Join the author in an in-depth, no-holds-barred look at the phenomenon of the Beatles and the often troubled Liverpool man behind it.
Perfect for every serious fan, rock historian, critic, the media, as well as all university and school systems.
Geoffrey Giuliano is the author of 32 biographies on the Beatles and other iconic rock groups of the 1960s. He is also a screenwriter, the voice on more than 500 popular audiobooks, and an actor in 25 films.
Series producer Avalon Giuliano based in New York. Produced by Alex Franchi in Milan. Edited and mixed by Macc Kay in Bangkok. ICON intern Eden Garret Giuliano. Music by AudioNautix.