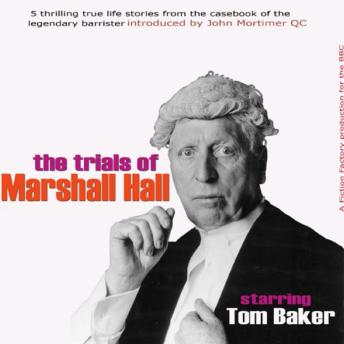 Edward Marshall-Hall, who was born in Brighton in 1858, became perhaps the country's most successful advocate of all time, building his reputation on a phenomenal talent for acquitting defendants in murder trials where a guilty verdict had seemed a foregone conclusion. Given that murder during this period carried a sentence of execution by hanging, he can be said to have saved a considerable number of souls, male and female, from the horrors of the noose.This series features reconstructions of Marshall-Hall's dramatic courtroom displays and his ingenious and persuasive tactics. It also takes us back to the strange and often sinister stories behind the terrible crimes in question. The series is presented by barrister and writer John Mortimer QC (creator of Rumpole at the Bailey), while actor Tom Baker (one of the best of the early Dr Whos) brings to the role of Marshall Hall all the theatricality, humour and mercurial moodiness for which the great advocate was known.
© Fiction Factory; (P) BBC Audiobooks Ltd