John Wycliffe: The Life and Legacy of the English Theologian Who Preceded the Protestant Reformation 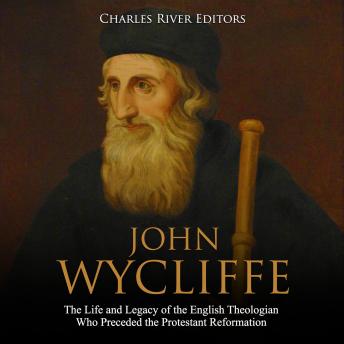 Theologian and reformer John Wycliffe never had the opportunity to take his doctrines outside of his native England, but he could never have imagined that his teachings would one day travel as far as 920 miles east to Bohemia. In fact, while his contentious convictions aroused much ado at home, receiving both praise and contempt from followers and ecclesiastical figures, his messages would be far more resonant across the Channel than they ever were back home.

The revival of Wycliffe's ideas, many believe, was ignited by receptive Bohemian students who were introduced to the reformer's works at Oxford University and became so moved by his thoughts that they felt it absolutely imperative to spread the good word in their own kingdoms. Questioning Christians quietly perused compilations of Wycliffe's books and were, at the very least, intrigued by the nonconformist's opinions. One curious mind, however, was supposedly so inspired by Wycliffe that he was at once galvanized into action. Instead of simply parroting Wycliffe's seditious ideas, he launched an entire movement and remained fervidly true to his cause, even when his own life was at stake. This fearless firebrand was none other than Jan Hus, the father of the Bohemian Reformation and one of the most infamous heretics in all of Europe.

Wycliffe's relentless criticism of the Church only continued to escalate, and eventually he was summoned to London and charged with the unforgivable crime of heresy. To the dismay of his detractors, the hearing was anything but black and white, and heated verbal exchanges soon spiraled into physical altercations. This resulted in a temporary deadlock that was broken only three months later when Pope Gregory XI published five papal bulls that unequivocally banned all of Wycliffe's teachings and found the heretic, dubbed the “master of errors,” guilty of 18 counts of heresy. The end, it appeared, was nigh, but Wycliffe remained unfazed.

John Wycliffe: The Life and Legacy of the English Theologian Who Preceded the Protestant Reformation

This title is due for release on August 24, 2019
We'll send you an email as soon as it is available!