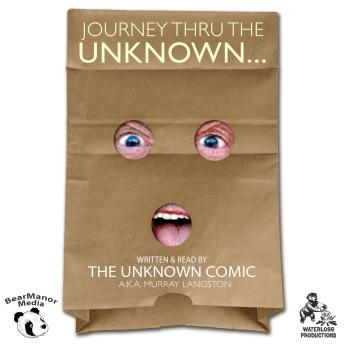 The memoir of Murray Langston, a.k.a. 'The Unknown Comic,' is a detailed account of the highlights and lowlights of each year of his life, from June 27, 1944 until his sixty-ninth birthday on June 27, 2013.

It's the story of how a poor kid from Montreal, being influenced by Jerry Lewis, longed to follow in his funny steps and somehow leave Canada and make it to Hollywood.

Spiced with humor, drama, and enough celebrities to warrant the alternate title Name-Droppers, Journey thru the Unknown offers many surprising revelations, including Murray being threatened by Frank Sinatra, partying all night with Elvis Presley, spending Christmas Eve with Lucille Ball, watching Bob Hope's Christmas show when he was in the military and working with him twenty years later, attending the Academy Awards, double-dating with Robin Williams, appearing with Patrick Swayze in his first film, hanging out at Steve Martin's house, playing practical jokes on Carol Burnett, befriending David Letterman on his first arrival to Los Angeles, holding Kate Hudson when she was only weeks old, hanging out at the Playboy Mansion, costarring with Jim Carrey in his very first television appearance.

Hear about Murray appearing for four years with Sonny and Cher, working alongside Ronald Reagan, O. J. Simpson, Bobby Darin, the Jackson 5, and his hero at the time, Jerry Lewis, among so many others.

Hear about how he also worked on several other television series starring Roger Miller, Wolfman Jack, Bobby Vinton, the Hudson Brothers, and more.

Hear about his appearing on practically every talk show of that era, from The Tonight Show to Merv Griffin, Mike Douglas, John Davidson, Dinah Shore, Howard Stern … and more.

Hear about his appearing at almost every hotel in Las Vegas, from the Sahara, the Riviera, the Sands, and the Tropicana to the Landmark, the Dunes, and more.

Hear about how he produced, wrote, directed, and starred in a couple of feature films, besides appearing in over twenty movies along with over eight hundred television appearances while starring in and directing several plays along the way with fellow actors Linda Blair, Pat Paulsen, Johnny Whitaker, Eddie Mekka, and more.

Hear about the ladies he appeared on stage with, including Charo, Helen Reddy, Melissa Manchester, Gladys Knight, Crystal Gayle, the Supremes, and more.

Hear about the many comics who were his opening act, such as Drew Carey, David Spade, Kevin Nealon, Ryan Stiles, and more.

Hear about the many comics he worked with in their early years who later became famous, such as Jay Leno, Cheech and Chong, Freddie Prinze, Gabe Kaplan, Michael Keaton, Howie Mandel, and more.

Hear about the many celebrities he worked with who he later became close friends with, like Ruth Buzzi, Frankie Avalon, Dom DeLuise, Jerry Van Dyke, Ted Knight, Harvey Korman, and especially his mentor, Redd Foxx.

Hear about celebrities he worked and hung out with who were arrogant and not very nice people, like Mickey Rooney, Sonny Bono, Billy Crystal, Chris Rock, Vickie Lawrence, and more.

Hear about some of the ladies he dated, like Miss USA, Playboy centerfolds, Debra Winger, Deidre Hall, Teri Garr, and Lucie Arnaz, to name a few.

Hear about how he is currently single but was married twice with two daughters, one of whom is Britney Spears' background singer and is about to make a huge splash on her own. The other a teenager with Down syndrome who is the light of his life and pure, liquid love.