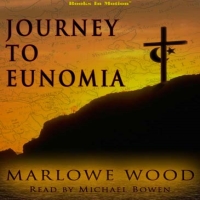 Uka is a black quarry slave in medieval Arabia, he has a destiny he can't even imagine. In Journey To Eunomia, he will match his will to live against the two competing religions. It begins when Abdul Rahman, a falsely accused and brutally punished advisor to a powerful Caliph is pardoned. Weakened by torture and near madness, the Caliph orders Abdul to choose a servant from the Wadi as Surr rock quarry near Yanbo. His eyes stop on Uka and together they embark on a quest of unparalleled danger, across deserts and seas to the eastern coast of Greece. Through a twist of fate, they meet Doreius, his ship confiscated in Alexandria during the Muslim invasion, and his crew murdered. The three men become friends and travel to the hidden harbor of Eunomia. Isolated and peaceful, the secular city knows little about the new religions and their plot to dominate minds and change cultures. For a brief time, they enjoy freedoms and liberties to practice freedom unknown to the forces clamoring to subjugate the world. In the end, Uka realizes his destiny is not, never has been, his own. He faces the age-old question, am I molded by my past, or can I rise above it?