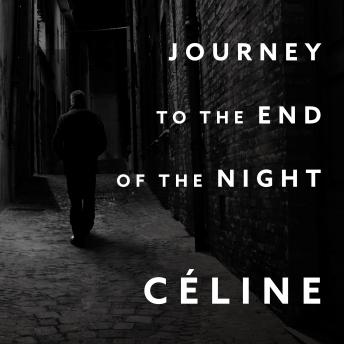 Journey to the End of the Night

Louis-Ferdinand Celine's revulsion and anger at what he considered the idiocy and hypocrisy of society explodes from nearly every page of this novel. Filled with slang and obscenities and written in raw, colloquial language, Journey to the End of the Night is a literary symphony of violence, cruelty and obscene nihilism. This book shocked most critics when it was first published in France in 1932, but quickly became a success with the reading public in Europe, and later in America, where it was first published by New Directions in 1952. The story of the improbable yet convincingly described travels of the petit-bourgeois (and largely autobiographical) antihero, Bardamu, from the trenches of World War I, to the African jungle, to New York and Detroit, and finally to life as a failed doctor in Paris, takes the readers by the scruff and hurtles them toward the novel's inevitable, sad conclusion.

Journey to the End of the Night