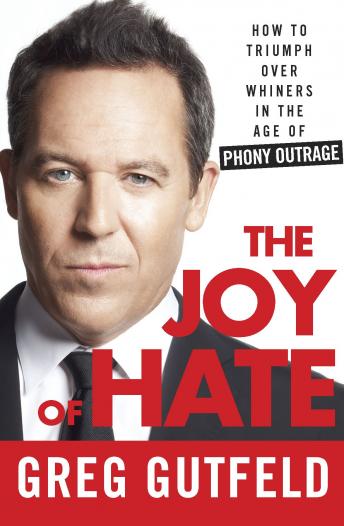 The Joy of Hate: How to Triumph over Whiners in the Age of Phony Outrage

From the irreverent star of Fox News’s Red Eye and The Five, hilarious observations on the manufactured outrage of an oversensitive, wussified culture.

Greg Gutfeld hates artificial tolerance. At the root of every single major political conflict is the annoying coddling Americans must endure of these harebrained liberal hypocrisies. In fact, most of the time liberals uses the mantle of tolerance as a guise for their pathetic intolerance. And what we really need is smart intolerance, or as Gutfeld reminds us, what we used to call common sense.

The Joy of Hate tackles this conundrum head on--replacing the idiocy of open-mindness with a shrewd judgmentalism that rejects stupid ideas, notions, and people. With countless examples grabbed from the headlines, Gutfeld provides readers with the enormous tally of what pisses us all off. For example:
- The double standard: You can make fun of Christians, but God forbid Muslims. It's okay to call a woman any name imaginable, as long as she's a Republican. And no problem if you're a bigot, as long as you're politically correct about it.
- The demonizing of the Tea Party and romanticizing of the Occupy Wall Streeters.
- The media who are always offended (see MSNBC lineup)
- How critics of Obamacare or illegal immigration are somehow immediately labeled racists.
- The endless debate over the Ground Zero Mosque (which Gutfeld planned to open a Muslim gay bar next to).
- As well as pretentious music criticism, slow-moving ceiling fans, and snotty restaurant hostesses.

Funny and sarcastic to the point of being mean (but in a nice way), The Joy of Hate points out the true jerks in this society and tells them all off.

Greg has alot to say and it is usually good. So many time he makes sense and he does look at things from both sides of the argument. Listen intently as it goes fast.