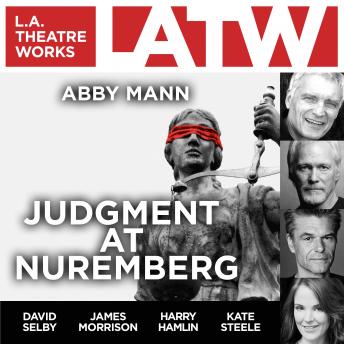 Abby Mann's classic story about the Nuremberg trials, under which German leaders were found guilty of crimes against humanity in 1945 and 1946. Even today, the play remains a shattering indictment of the consequences of unchecked authority and the seductive power of group thought.

Includes an audience talkback with Judge Bruce Einhorn, who served at the Justice Department supervising litigation against Nazi war criminals and is currently a professor at Pepperdine University.

Honorary Executive Producer, David Kavner. Special thanks to Metro-Goldwyn-Mayer Studios. Directed by Shannon Cochran and recorded before an audience by L.A. Theatre Works.

This title is due for release on January 15, 2016
We'll send you an email as soon as it is available!