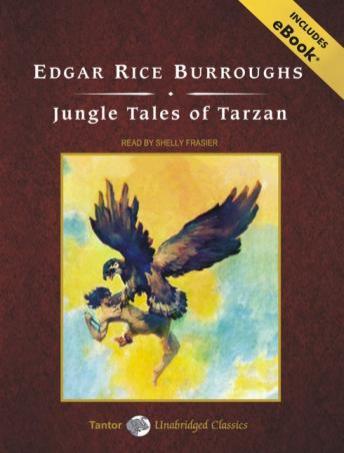 Edgar Rice Burroughs created one of the most iconic figures in American pop culture, Tarzan of the Apes. It is impossible to overstate his influence on entire genres of popular literature in the decades after his enormously winning pulp novels sparked the public's imagination.

Jungle Tales of Tarzan explores the life of the young Tarzan, his adventurous boyhood and teen years among the great apes and other wild creatures that were his only family. The young Tarzan was unlike his companions and playmates-theirs was a simple, savage life, filled with little but killing or being killed. But Tarzan had all of a normal boy's desire to learn. He had taught himself to read from books left by his dead father. Now he sought to apply this book knowledge to the world around him. He sought for such things as the source of dreams and the whereabouts of God. And he searched for the love and affection that every human being needs.

The stories that can be found in Jungles Tales of Tarzan are 'Tarzan's First Love,' 'The Capture of Tarzan,' 'The Fight for the Balu,' 'The God of Tarzan,' 'Tarzan and the Black Boy,' 'The Witch-Doctor Seeks Vengeance,' 'The End of Bukawai,' 'The Lion,' 'The Nightmare,' 'The Battle for Teeka,' 'A Jungle Joke,' and 'Tarzan Rescues the Moon.'