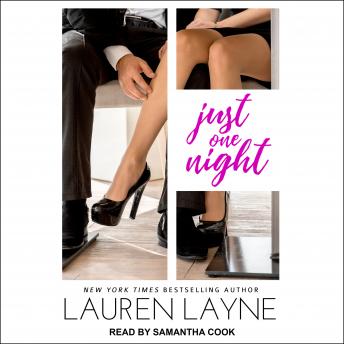 Riley McKenna knows sex-good sex, bad sex, kinky sex. Her articles in Stiletto magazine are the publication's most scandalous-and the most read. But when Stiletto's fiftieth anniversary issue requires her column to get a lot more personal, Riley is forced to confront a long-hidden secret: Her own sexual experience is limited to one awkward college encounter. Now Riley is about to call in the favor of a lifetime from the one man who's always held her heart.

Sam Compton knows two things about Riley McKenna: She's the only woman for him. But as his best friend's little sister, she's also completely off-limits. Sam shouldn't even consider her proposition: to have a one-night stand in the name of research. But the thought of another man putting his hands on Riley is more than Sam can handle, and soon he's agreeing to one night with New York's resident sexpot. But Riley's full of surprises, and what starts as 'one time only' soon becomes 'just one more time.' And then one more. And before they know it, Riley and Sam learn firsthand that when it comes to love, there's no such thing as just one night.