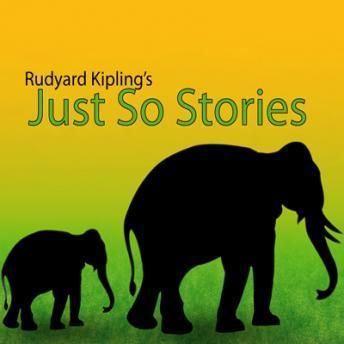 Rudyard Kipling's classic collection of short stories for children, offers fantastic explanations for the origins of certain animals' characteristics, why tides ebb and flow and even how the alphabet was invented.

Following the conventions of traditional folklore and legends, Just So Stories have deliberately fanciful narratives with intent of teaching a moral lesson, but providing enough entertainment to make the lesson palatable.

Table of Contents:
1. How the Whale Got his Throat
2. How the Camel Got its Hump
3. How the Rhinoceros Got His Skin
4. How the Leopard Got its Spots
5. The Elephant's Child
6. The Sing-Song of Old Man Kangaroo
7. The Beginning of the Armadillos
8. How the First Letter was Written
9. How the Alphabet was Made
10. The Crab that Played with the Sea
11. The Cat that Walked by Himself
12. The Butterfly that Stamped

AUTHOR
Rudyard Kipling
Joseph Rudyard Kipling (1865-1936) was popular author and poet. Born in Bombay, India, but raised in England, Kipling established an international reputation with his stories and verses of Indian and Army life, including such classics as The Jungle Book and Kim. In 1907, he became the first English-language writer to receive the Nobel Prize.

COMMENTARY
Reviews for Alcazar AudioWorks' production of Just So Stories
Kipling's JUST SO STORIES are a travelogue of famous places--the Amazon, the Limpopo, the Gobi Desert, and many other well-known global landmarks. The diversity of the animals in the stories dictates that they inhabit numerous continents. In David Thorn narration listeners can appreciate Kipling's sense of humor, as well as the lesson embedded in each story. He reads all the stories with a quiet, understated cadence that lulls listeners into a different time and place. As Thorn narrates with a twinkle in his eye, each listener can easily imagine him- or herself as ""Dear Beloved,"" the recipient of these wonderful imaginings. This is a classic to be listened to again and again. J.K.R. © AudioFile 2007, Portland, Maine [Published: OCT/ NOV 07]

The twelve stories that make up Rudyard Kipling's Just So Stories are delightful children's reading or in this case listening. Kipling takes us on a journey to the Howling Desert to learn how the camel got his hump, a Neolithic Cave to learn how the alphabet was made, and the Amazon to learn about the beginning of the armadillos amongst other exotic locales for equally legendary tales. Narrator David Thorn is up to the task of enticing the listener along for the ride and bringing the words on paper to magical life in the mind's eye of the listener. His voicing adds that touch of the exotic while not running away into overblown Disney characterization. This is terrific family-read-aloud, since it is unabridged and can save mom or dad's voice. It ought also to keep young ones entertained during long drives.
Reviewed By: Beverly Krueger - EHO Eclectic Homeschool Online

Wonderful memories
If you could sum up Just So Stories in three words, what would they be?
Imaginative
Inventive
Memories
Who was your favorite character and why?
The Elephant Child
Did you have an extreme reaction to this book? Did it make you laugh or cry?
Laught a lot
Any additional comments?
A book my children and grandchildren I hope will love as much as I do.
Listener Review - Audible.com
"