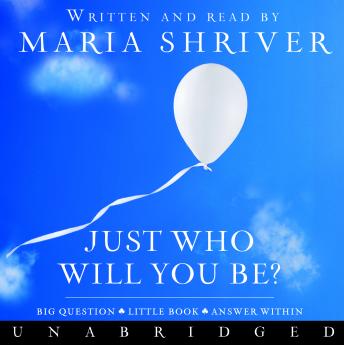 Just Who Will You Be?: Big Question. Little Book. Answer Within.

Just Who Will You Be is a candid, heartfelt, and inspirational book for seekers of all ages. Inspired by a speech she gave, Maria Shriver's message is that what you do in your life isn't what matters. It's who you are. It's an important lesson that will appeal to anyone of any age looking for a life of meaning.

In her own life, Shriver always walked straight down her own distinctive path, achieving her childhood goal of becoming 'award-winning network newswoman Maria Shriver'. But when her husband was elected California's Governor and she suddenly had to leave her job at NBC News, Maria was thrown for a loop. Right about then, her nephew asked her to speak at his high school graduation. She resisted, wondering how she could possibly give advice to kids, when she was feeling so lost herself. But in the end she relented and decided to dig down and dig deep, and the result is this little jewel.

Just Who Will You Be reminds us that the answer to many of life's question lie within -- and that we're all works in progress. That means it's never too late to become the person you want to be.

Now the question for you is this: Just who will you be?

Just Who Will You Be?: Big Question. Little Book. Answer Within.