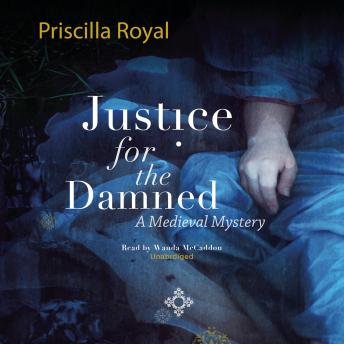 Justice for the Damned

It is May 1272, and Prioress Eleanor of Tyndal, recovering from a near-fatal winter fever, journeys to Amesbury Priory to visit her aunt in time for the Feast of Saint Melor. Although Eleanor hopes to regain her strength in the midst of pleasant childhood memories, death reveals a most troublesome fondness for her company.

A ghost now haunts Amesbury. Is it perhaps the spirit of a pregnant woman who drowned herself in the River Avon? But soon the specter turns murderous. A man is decapitated near the river where the grim figure walks, yet Sister Beatrice, Eleanor's aunt and acting prioress of Amesbury, shows an uncharacteristic hesitancy about taking charge of any investigation.

As others apparently fall victim to the vengeful ghost, Eleanor struggles to put a human face on the restless spirit, and Brother Thomas, pursuing a secret mission for the church connected with the priory's famous psaltery, finds that his own demons have unexpectedly taken on a very human form.

Corpses grow in number. Death dances with glee. All hope of sweet spring begins to die, and even love takes on a somber hue.

Justice for the Damned