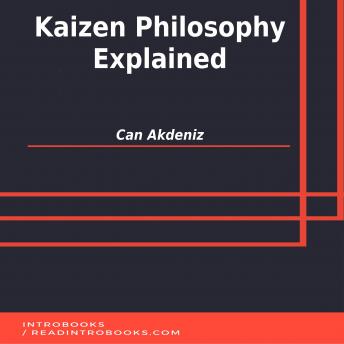 Written By: Can Akdeniz

In Japanese administration, kaizen signifies 'persistent improvement' including the entire workforce from the top administration to middle managers and laborers. The source of Japan's kaizen movement was the quality control system imported from the United States (US) in the post-WW2 period. Japan took in and developed this as its own management practice strategy which later even surpassed execution in the US. This system that they adapted, got to be known as kaizen, spread quickly among Japanese organizations including countless small and medium-sized enterprises. In this manner, it spread abroad as Japanese business exercises extended overseas and Japanese organizations started to construct production systems with local organizations. Japan offers help for kaizen in numerous developing nations through private channels such as intra-organization technology transfer and bolster the local suppliers, and additionally through open (public) channels, for example, official development assistance (ODA) and direction given by different public associations. At this point, kaizen help is one of the standard menu items of Japanese support for industries in developing nations. While such help, at first, was centered on East Asia where Japan had active business organizations, it has now been executed generally in other areas including South Asia, Latin America and also, Eastern Europe. Nevertheless, to the extent to which Sub-Saharan Africa is concerned, knowledge sharing and execution of Kaizen has been rather restricted aside from a couple of prominent cases. There are a ton of unexploited advantages of specific and very well calibrated the use of kaizen from which various nations can draw upon to enhance their service and production units. There is additionally a requirement for Japan to all the more effectively propagates the thought of kaizen in other countries as an extra menu item in their industrial development procedures.

This title is due for release on April 8, 2016
We'll send you an email as soon as it is available!