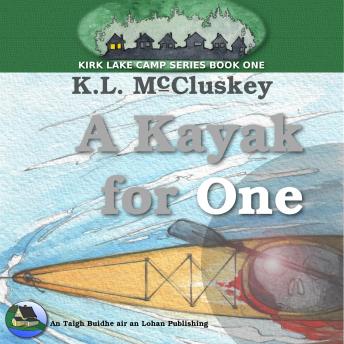 A Kayak for One

A Charlene Parker mystery.
Set mostly in northern Ontario at a cottage resort and partly in rural Nova Scotia, A Kayak for One (book 1 in the Kirk Lake Camp series ) features a former Hamilton police detective who would like most of all to just do the never ending everyday chores of running a resort but who seems to end up having to solve murders instead.
As if that isn't enough the former detective, Charlene Parker, also has to deal with creepy peeping Bob across the lake, the local OPP detective Sarah who has issues to no end that Charlene must hear about, a bagpipe playing lover across town, an old house to fix up across the country on the east coast and with all that still find time to cook for herself and half the police detachment while they poke about the resort trying to solve the murders before Charlene does.
It's enough to make Charlene want to head south back to a dark alley in the north end of Hamilton to chase a criminal in a hoodie (always a hoodie), with a gun, who is too scary, too mean, too drunk, too stoned, too hilarious, too stupid and too close. Thank goodness she has time to unwind every now and then with a good Cape Breton single malt whisky.
What could go wrong this season when a professor and geology students rent a few cottages as a base for field work in the area? They're educated young adults led by an experienced professor. Everyone could get along and hunker down and focus on the purpose of the trip, a 10 day advanced course, a study of the unique rock formations in northern Ontario. It's near the end of the tourist season and relief from working long days for long weeks for long months is almost palatable for the former detective turned resort owner. How much work or trouble could the students be for Charlene? Will it be a peaceful end to the busy summer season...for a change? Will it end without a murder ... for a change?