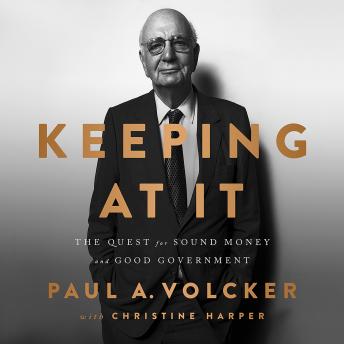 Keeping At It: The Quest for Sound Money and Good Government

The extraordinary life story of the former chairman of the Federal Reserve, whose absolute integrity provides the inspiration we need as our constitutional system and political tradition are being tested to the breaking point.

As chairman of the Federal Reserve (1979-1987), Paul Volcker slayed the inflation dragon that was consuming the American economy and restored the world's faith in central bankers. That extraordinary feat was just one pivotal episode in a decades-long career serving six presidents.
Told with wit, humor, and down-to-earth erudition, the narrative of Volcker's career illuminates the changes that have taken place in American life, government, and the economy since World War II. He vibrantly illustrates the crises he managed alongside the world's leading politicians, central bankers, and financiers. Yet he first found his model for competent and ethical governance in his father, the town manager of Teaneck, NJ, who instilled Volcker's dedication to absolute integrity and his 'three verities' of stable prices, sound finance, and good government.

Keeping At It: The Quest for Sound Money and Good Government