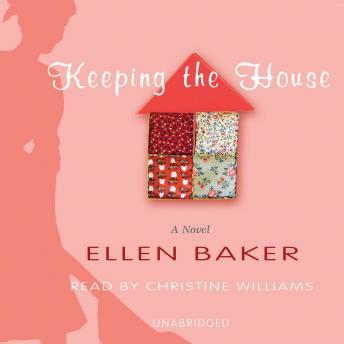 Keeping the House: A Novel

Set in the conformist 1950s and reaching back to span two world wars, Ellen Baker’s superb novel is the story of a newlywed who falls in love with a grand abandoned house and begins to unravel dark secrets woven through the generations of a family. Like Whitney Otto’s How to Make an American Quilt in its intimate portrayal of women’s lives, and reminiscent of novels by Elizabeth Berg and Anne Tyler, Keeping the House is a rich tapestry of a novel that introduces a wonderful new fiction writer.
When Dolly Magnuson moves to Pine Rapids, Wisconsin, in 1950, she discovers all too soon that making marriage work is harder than it looks in the pages of the Ladies’ Home Journal. Dolly tries to adapt to her new life by keeping the house, supporting her husband’s career, and fretting about dinner menus. She even gives up her dream of flying an airplane, trying instead to fit in at the stuffy Ladies Aid quilting circle. Soon, though, her loneliness and restless imagination are seized by the vacant house on the hill. As Dolly’s life and marriage become increasingly difficult, she begins to lose herself in piecing together the story of three generations of Mickelson men and women: Wilma Mickelson, who came to Pine Rapids as a new bride in 1896 and fell in love with a man who was not her husband; her oldest son, Jack, who fought as a Marine in the trenches of World War I; and Jack’s son, JJ, a troubled veteran of World War II, who returns home to discover Dolly in his grandparents’ house.

Keeping the House: A Novel