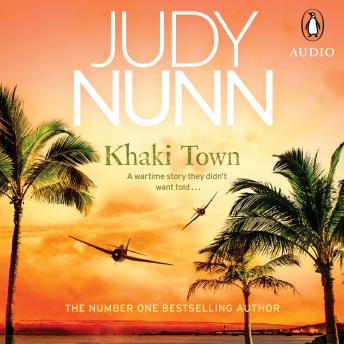 Khaki Town, Judy Nunn's stunning new novel, is inspired by a wartime true story which the Government kept secret for over seventy years.

'It seems to have happened overnight,' Val thought as she pulled the beers. 'We've become a khaki town.'

It's March 1942. Singapore has fallen. Darwin has been bombed. Australia is on the brink of being invaded by the Imperial Japanese Forces. And Val Callahan, publican of The Brown's Hotel in Townsville, could not be happier as she contemplates the fortune she's making from lonely, thirsty soldiers.

Overnight the small Queensland city is transformed into the transport hub for 70,000 American and Australian soldiers destined for combat in the South Pacific. Barbed wire and gun emplacements cover the beaches. Historic buildings have been commandeered. And the dance halls are in full swing with jitterbug and jive.

The Australian troops, short on rations and equipment, begrudge the confident, well-fed 'Yanks' who have taken over their town (and women). And there's growing conflict, too, within the American ranks. Because black GIs are enjoying the absence of segregation and the white GIs do not like it.

Then one night a massive street fight leaves a black soldier lying dead in the street, and the situation explodes into violent confrontation.

We played this in our car while travelling in the north Really enjoyed it.

Took me a long time to get into this book. By about half way I began to really enjoy it. Took a while though.