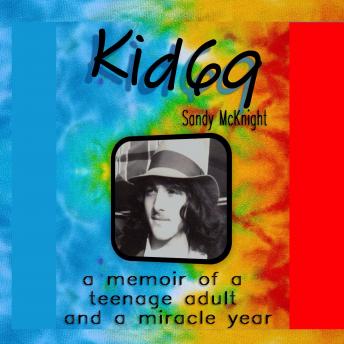 Kid69: a memoir of a teenage adult and a miracle year

Sandy was a Brooklyn boy, 15, and not easily fazed. So when the year 1969 came along, he jumped right in. By the time he turned 16 in July, he'd been arrested as an anti-war demonstrator, kicked out of school for rabble-rousing, and had moved out of his parents house in Bensonhurst to a studio apartment sublet in the East Village of Manhattan. That magical summer, while the whole world watched a small step on the moon, he worked full-time in a Brooklyn shoe store, religiously followed his miracle Mets, lost his virginity to a runaway, and capped it all off with a wild weekend at Woodstock. Life was good. But after that special summer came the fall. He returned to school, returned home, and tried to fit in...but something had changed. He had changed, but so had the world. As summer turned to bummer, Sandy tried to make sense of the negative nightly news: the Manson murders, Nixon's expansion of the Vietnam war, the regressive, reactionary rise of the 'silent majority'...along with an inevitable letdown after that blissful summer. In the end, Kid69 had to let go of both '69, and the kid. Part 'coming of age', part 'coming of rage', part revolution, part revelation...here comes Kid69!