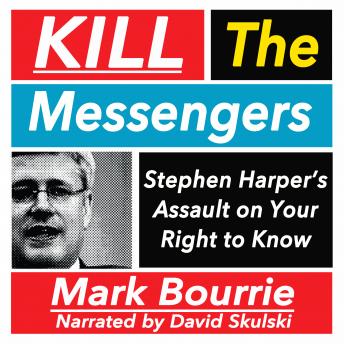 Kill the Messengers: Stephen Harper's Assault on your Right to Know

Information, the lifeblood of democracy, is under attack in Canada. Instead of the transparency Stephen Harper promised, the nation's business is done in secret, and an army of lobbyists and public-relations flackies now set the agenda and decide what we get to know.

When we are denied information, when we no longer feel free to discuss political events or issues, when we are discouraged from even thinking about politics, voting loses its appeal. In such a climate, exercising ones democratic rights seems superfluous.Stephen Harper and his government, while delegitimizing the media's role in our political system, also undertook a war on the nations information systems: Statistics Canada was effectively killed, hundreds of scientists and statisticians were fired, our Library and Archives Canada were gutted and freedom of information rules turned into a joke. Facts, it would seem, are no longer relevant.

In Kill the Messengers: Stephen Harper's Assault on Your Right to Know, Mark Bourrie reveals how events conspired to silence Canadian media and elect an anti-intellectual government determined to govern in secret Using multiple examples and case studies, Bourrie illustrates how the collection of facts that embarrass the government's position or undermine it's ideologically based decsion-making have been suppressed through budget cuts. And, perhaps more importantly, Bourrie shows how to take back your right to be informed and heard.

Kill the Messengers is more than just a collection of complaints bemoaning the current state of Canadian media, it is a call to arms for all of us to become informed citizens and active participants in the democratic process. This is a book all Canadians are entitled access to hear-and now, they'll get the chance.