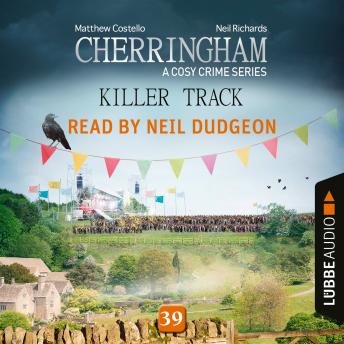 Every year Lady Repton opens up her grand estate to host 'Cherringfest' - the Cotswold's favourite music festival. And this year will be special, featuring not just the return of the legendary and infamous metal rock band, Lizard ... but also the home debut of the young and wildly successful new group, Unlost. But what should be a summer weekend of fantastic music, food and fun for all, turns frightening when murder is threatened, and one performer is nearly killed. Soon Jack and Sarah are in a race against time, trying to untangle a web of jealousy, egos and revenge before this Cherringfest ends in a deadly climax ...

Set in the sleepy English village of Cherringham, the detective series brings together an unlikely sleuthing duo: English web designer Sarah and American ex-cop Jack. Thrilling and deadly - but with a spot of tea - it's like Rosamunde Pilcher meets Inspector Barnaby. Each of the self-contained episodes is a quick read for the morning commute, while waiting for the doctor, or when curling up with a hot cuppa.

Co-authors Neil Richards (based in the UK) and Matthew Costello (based in the US), have been writing together since the mid-90s, creating content and working on projects for the BBC, Disney Channel, Sony, ABC, Eidos, and Nintendo to name but a few. Their transatlantic collaboration has underpinned scores of TV drama scripts, computer games, radio shows, and the best-selling mystery series Cherringham. Their latest series project is called Mydworth Mysteries.

This title is due for release on September 10, 2021
We'll send you an email as soon as it is available!