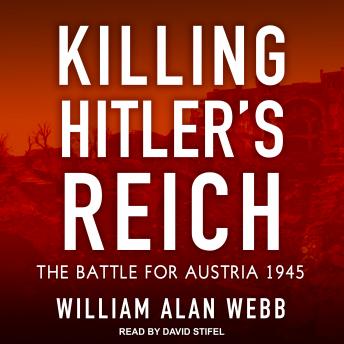 Killing Hitler's Reich, The Battle For Austria 1945, is the history of the bloody Battle for Austria in 1945.

Austria's fate held major ramifications for postwar Europe and the entire free world, yet there is no complete account of the campaign written in English. Given the scale of the fighting and the scope of the consequences, this book fills a major gap in the literature of World War Two.

On VE Day Army Group South listed 450,000 men still under arms in four armies. It was this massive force that made General Dwight Eisenhower change the entire focus of American ground operations to cut off Germans from retreating into the National Redoubt.

Moreover, it was Austria not Berlin, that proved to be the graveyard of the Waffen SS. No less than fifteen of Himmler's divisions ended the war there.

And as the German war effort disintegrated into chaos, high ranking Nazis fled the dying Reich through Austria and into Italy. Some made it, many didn't. Killing Hitler's Reich follows the chase and capture of some of the most notorious, such as Himmler's Second in Command, Ernst Kaltenbrunner.