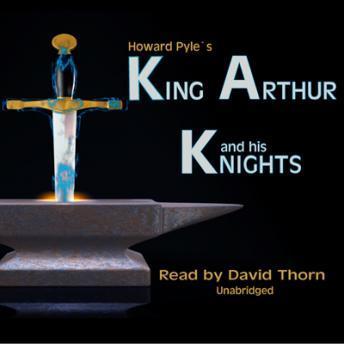 King Arthur and His Knights

Howard Pyle (who also wrote The Merry Adventures of Robin Hood) weaves the tales of chivalrous Knights, the magic sword of Excalibur, the Magician Merlin the Wise, and the legendary Arthur, later to become King of Britain. Pyle describes bouts of jousting, and knightly jealousies played out in grand style. Even in our present day, these stories last and challenge us to be our best, truthful, brave, and always wanting to right wrongs to those who cannot speak up for themselves.

Table of Contents:
Book One: The Book of King Arthur
Part I: The Winning of Kinghood
Chapter 01: How Sir Kay did Combat in a Great Tournament at London Town and of How He Break His Sword. Likewise, How Arthur Found a New Sword For Him
Chapter 02: How Arthur Twice Performed the Miracle of the Sword Before Sir Ector and of How His Birthright Was Discovered Unto Him
Chapter 03: How Several Kings and High Dukes Assayed to Draw the Sword Out of the Anvil and How They Failed. Likewise How Arthur Made the Assay and Succeeded Therein

Part II: The Winning of a Sword
Chapter 01: How There Came a Certain Wounded Knight Unto the Court of King Arthur, How a Young Knight of the King's Court Sought To Avenge Him and Failed and How the King Thereupon Took That Assay Upon Himself
Chapter 02: How King Arthur Fought With the Sable Knight and How He Was Sorely Wounded. Likewise How Merlin Brought Him Safe Away From the Field of Batttle
Chapter 03: How King Arthur Found a Noble Sword In a Very Wonderful Manner. And How He Again Fought With It and Won That Battle

Book Two: The Book of Three Worthies
Part I - The Story of Merlin
Chapter 01: How Queen Morgana le Fay Meditated Evil Against King Arthur and How She Sent a Damsel Beguile the Enchanter, Merlin
Chapter 02: How Merlin Journeyed With Vivien Unto the Valley of Foyousness and How He Builded for Her a Castle at That Place. Also, How Her Taught Her the Wisdom of Magic and of How She Compassed His Downfall Thereby
Chapter 03: How Queen Morgana le Fay Returned to Camelot and to the Court With Intent to Do Ill Will to King Arthur, Also How King Arthur and Others Went a-Hunting and of What Befell Thereby
Chapter 04: What Befell Sir Accalon, and How King Arthur Fought an Affair-at-Arms With Swords, and How He Came Nigh to Losing His Life Thereby

AUTHOR
Howard Pyle was born on March 5, 1853 in Wilmington, Delaware. From the time he was a very small boy he loved pictures, especially the pictures in storybooks. Among his favorites were Grimm's German Fairy Tales and Arabian Nights. At the age of twenty-one, Pyle began to contribute illustrations and fables to St. Nicholas magazine and later went on to write and illustrate books for children. His first was The Merry Adventures of Robin Hood in 1883. Many more books followed, including Pepper and Salt; or, Seasoning for Young Folk, Otto of the Silver Hand, Howard Pyle's Book of Pirates, and The Story of King Arthur and His Knights. He also taught illustration at the Drexel Institute in Philadelphia and later set up his own art school in Wilmington. He died on November 9, 1911, in Florence, Italy.-Amazon.com

COMMENTARY
Reviews for Alcazar AudioWorks' production of King Arthur and His Knights
If one is ready to take the plunge into intricate and antiquated language and to attend to the genealogy of each character and the minute details of each episode, then one will come away highly satisfied and steeped in knowledge of Arthur's early years. David Thorn is a masterful narrator. As his accent transports us to the British Isles, his pacing and conversational tone provide an intimate link to the characters. Thorn's characterizations are distinctive. He creates an ethereal Merlin, mystical Ladies from the Lake, an unassuming yet regal Arthur, a scheming Morgan le Fay, and a gracious Sir Pellias. From the moment Arthur is entrusted to Merlin until the quest for the white hart, the stories are riveting. A.R. © AudioFile 2007, Portland, Maine [Published: APR/ MAY 07]

The Story of King Arthur and his Knights, an unabridged book-on-CD set (ah, how that word ""unabridged"" reassures and satisfies the avid bibliophile), didn't get a hearing at our house for the longest time. Every time I suggested putting it on, while washing dishes or folding laundry or during quiet times for drawing or sculpting with clay or other busy-hand endeavors--every time I said, ""Let's listen to King Arthur,"" our youngest would groan and protest bitterly. Since such a listening time is supposed to be pleasurable and not torture, I'd put something else on.

At last I had wit enough to ask, ""Why?"" We had read aloud other books by Howard Pyle with great success, among them Men of Iron, The Adventures of Robin Hood, and a book of original fairy tales. I thought perhaps our youngest had stumbled across the two volumes we have of King Arthur stories by Pyle, and fallen in the reading. The language is elegant, but definitely old-fashioned.
The answer surprised me: The biggest strike against Pyle's King Arthur was the fact that it wasn't Gerald Morris' The Squire's Tale (please see related review). A little sneakiness seemed in order, to avoid bitter protests and stubborn, though passive, resistance to listening.

The next time we had to go somewhere in the car as a family, I put on the first CD, and before anyone quite realized it, we were listening. Youngest groaned, but was told by Dad to settle down. By the time we reached our destination, everyone was caught up in the story of the Sword in the Stone, and the bitter protests were rather in the other direction (as in, ""You can't turn it off now!"")
David Thorn does his usual marvelous job of bringing the story to life. He has a rich, melodious voice, well-suited to Pyle's flowing narrative. The author's old-fashioned language (what youngest refers to as ""all those thees and thous""), almost an insurmountable barrier to a struggling reader, becomes accessible through Mr. Thorn's expressive interpretation.

And so we have an exciting story, well-told, with thrilling adventures infused with subtle flashes of humor and irony. There are about eleven and a half hours here, and we've enjoyed every moment. I need to mention a couple of nice features: Pleasant music serves to introduce and conclude each chapter, and the chapters are introduced by a pleasant feminine voice, not credited on the CD case, which breaks up the narrative nicely and helps to hold the attention. Each CD comes divided into three-minute tracks, making it easy to find your place again if interrupted.

The Story of King Arthur and His Knights has become the preferred listening around our house, lately. Considering all the well-loved options we have on our bookshelf, that is high praise indeed.
Reviewed By: Jean Hall - EHO Eclectic Homeschool Online

An Entertaining Account of Arthur's Early Days
For a complete adult telling of the stories of King Arthur, listen to Malory or T. H. White, because Pyle's The Story of King Arthur and His Knights is only the first of his books about Arthur, recounting Arthur's birth and youth and winning of Excalibur and Guinevere, and then Merlin's fate and the stories of Sir Pellias and Sir Gawaine. Moreover, Pyle moralizes after the episodes, telling us, for example, that although we may not literally become knights with swords, we may wield truth (Excalibur) and faith (its scabbard).

Pyle assumes a vivid and muscular "medieval" style, as when Arthur jousts a knight "out of his saddle like a windmill-whirling in the air and smiting the earth so that the ground shuddered beneath him." Or as when Arthur delivers some justice: "At this, the face of that knight fell all pale, like to ashes, and he emitted a sound similar to the sound made by a hare when the hound lays hold upon it. Then King Arthur catched him very violently by the arm, and he catched the locket and brake it away from about the knight's neck, and upon that the knight shrieked very loud, and fell down upon his knees and besought mercy of the King, and there was great uproar in that place."

And the Story of King Arthur has plenty of exciting and humorous moments and scenes of sublime wonder and beauty. And knights, wizards, faeries, dastards, damsels, hermits, quests, enchantments, disguises, combats, loves, hates, oaths, betrayals, humiliations, machinations, and glorifications. Despite Pyle's exaltation of Arthur and company, they are often humanly proud, foolish, seducible, and violent. And Thorn reads all with energy and accuracy.
Listener Review - Audible.com
"

King Arthur and His Knights