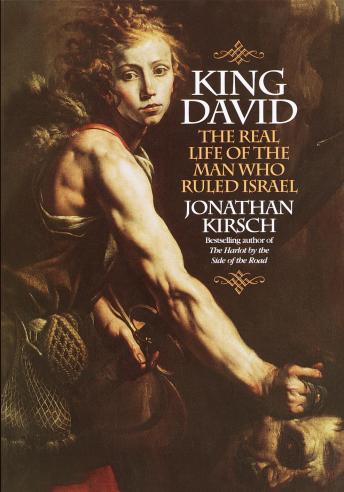 David, King of the Jews, possessed every flaw and failing a mortal is capable of, yet men and women adored him and God showered him with many more blessings than he did Abraham or Moses. His sexual appetite and prowess were matched only by his violence, both on the battlefield and in the bedroom. A charismatic leader, exalted as "a man after God's own heart," he was also capable of deep cunning, deceit, and betrayal. Now, in King David: The Real Life of the Man Who Ruled Israel, bestselling author Jonathan Kirsch reveals this commanding individual in all his glory and fallibility.

In a taut, dramatic narrative, Kirsch brings new depth and psychological complexity to the familiar events of David's life--his slaying of the giant Goliath and his swift challenge to the weak rule of Saul, the first Jewish king; his tragic relationship with Saul's son Jonathan, David's cherished friend (and possibly lover); his celebrated reign in Jerusalem, where his dynasty would hold sway for generations. Yet for all his greatness, David was also a man in thrall to his passions--a voracious lover who secured the favors of his beautiful mistress Bathsheba by secretly arranging the death of her innocent husband; a merciless warrior who triumphed through cruelty; a troubled father who failed to protect his daughter from rape and whose beloved son Absalom rose against him in armed insurrection.

Weaving together biblical texts with centuries of interpretation and commentary, Jonathan Kirsch brings King David to life in these pages with extraordinary freshness, intimacy, and vividness of detail. At the center of this inspiring narrative stands a hero of flesh and blood--not the cartoon giant-slayer of sermons and Sunday school stories or the immaculate ruler of legend and art but a magnetic, disturbingly familiar man--a man as vibrant and compelling today as he has been for millennia.