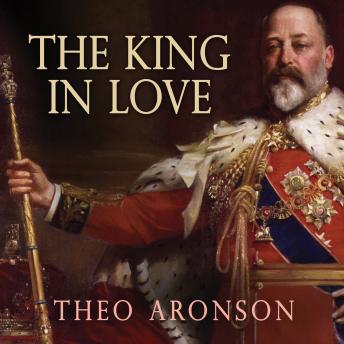 The King in Love is an all-embracing account of the loves of that celebrated royal womanizer, Edward VII, as Prince of Wales and King. It is also a study of the three women with whom the King was most deeply in love-his 'official' mistresses, Lillie Langtry, Daisy Warwick, and Alice Keppel.

Spanning three decades and packed with incident, scandal, and high romance, the story is set in the extravagant and hypocritical world of late Victorian and Edwardian society. It is full of colorful characters: Edward's beautiful and betrayed wife Alexandra; the three cuckolded husbands-Edward Langtry, the Earl of Warwick, and the Honorable George Keppel; the flamboyant Oscar Wilde; the sensuous Sarah Bernhardt; the dissipated Prince Albert Victor; and the sexually complex W. E. Gladstone.

Royal biographer Theo Aronson draws on new and unfamiliar material in this vivid book and reassesses many aspects of his subjects' lives. He challenges long-established myths and reveals much that was hitherto unknown-not least the extraordinary scene that took place at the deathbed of King Edward VII. The result is a brilliant evocation of a world, and a way of life, that is gone forever.