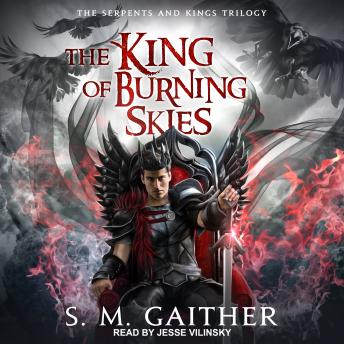 The King of Burning Skies

War is coming to the Sundolian Empire. Can a forbidden love between a prince and a dragon save it? Or are they destined to bring it all down in flames?

The kingdoms are shattering. A tyrant rules from the north. The Dragon clan, once exiled beyond the edges of the empire, has joined forces with a bloodthirsty, opportunistic king in the south.

And the crown prince of Rooks is running out of options to keep the people and places he loves safe. His best chance to save his world and take the crown from his mad father may lie in the most dangerous of those exiled Dragons-a woman who is just as likely to ruin him as she is to save him.

Alaya is part human, part divine, and fully prepared to use her growing powers to destroy everyone that has hurt and betrayed her. The list of those people is long. Despite her pain, she still intends to find a way to bring peace to her world-but she can't do it alone.

The high king must fall. What was broken must be mended.

And somehow, both Dragon and Rook must find a way to protect each other from the dark side of the magic building within and around them . . .