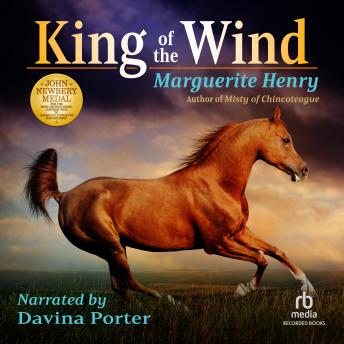 Generations of young readers continue to fall in love with Marguerite Henry's 'horse stories.' In one of her most famous, King of the Wind, the author traces the ancestry of the great Kentucky Derby winner, Man o' War, whose mysterious pedigree is linked to the noble line leading from the Godolphin Arabian. Born in the Sultan of Morocco's stone stables, under the watchful eyes of the mute stable boy, Agba, the golden-coated foal seems both a blessing and a curse. On its chest it bears a cross-hatching of hair believed to be a sign of ill luck. But on its hind heel is s small white spot, the emblem of swiftness. After its mother's death, the foal is nursed by the affectionate Agba who names him Sham, for the sun. Two years later, Agba is called to the Sultan's court and ordered to accompany Sham, and five other horses and their stable boys to France, where the six steeds are to be made a present to the King. Agba and the other boys are given one command: 'Each boy will care for the horse in his charge as long as that horse shall live.' With this promise to strengthen him, Agba makes the arduous journey across the Sahara to France and the court of Louis XV. Little could he know what heartache and glory his loyalty to the noble Sham would bring.

This title is due for release on June 20, 2014
We'll send you an email as soon as it is available!