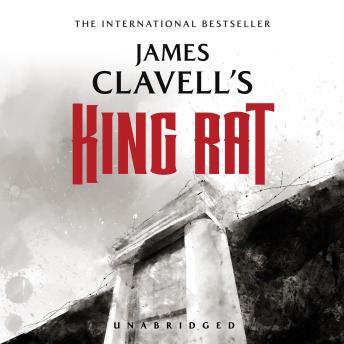 #4 of The Asian Saga

The epic novel of war, savagery, and survival in a Japanese POW camp by the #1 New York Times bestselling author and unparalleled master of historical fiction, James Clavell

Japanese POW camp Changi, Singapore: hell on earth for the soldiers contained within its barbed wire walls. Officers and enlisted men, all prisoners together, yet the old hierarchies and rivalries survive. An American corporal, known as the King, has used his personality and wiles to facilitate trading with guards and locals to get needed food, supplies, even information into the camp. The imprisoned upper-class officers have never had to do things for themselves, and now they are reduced to wearing rags while the King’s clean shirt, gained through guts and moxie, seems like luxury in comparison. In the camp, everything has its price and everything is for sale. But trading is illegal—and the King has made a formidable enemy. Robin Grey, the provost marshal, hates the King and all he represents. Grey, though he grew up modestly, fervently believes in the British class system: everyone should know their place, and he knows the King’s place is at the bottom.

The King does have a friend in Peter Marlowe, who, though wary of the King and himself a product of the British system, finds himself drawn to the charismatic man who just might be the only one who can save them from both the inhumanity of the prison camp but also from themselves. Powerful and engrossing, King Rat artfully weaves the author’s own World War II prison camp experiences into a compelling narrative of survival amidst the grim realities of war and what men can do when pushed to the edge. A taut masterwork of World War II historical fiction by bestselling author James Clavell.