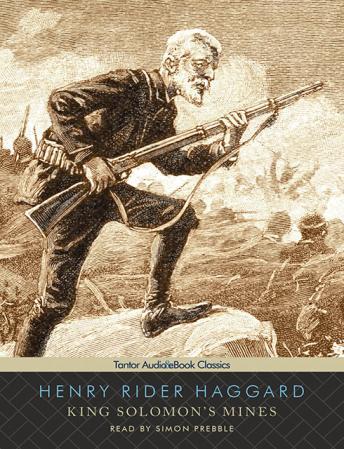 One of the bestselling novels of the nineteenth century, King Solomon's Mines has inspired dozens of adventure stories, including Edgar Rice Burroughs's Tarzan books and the Indiana Jones movies. Vivid and enormously action-packed, Henry Rider Haggard's tale of danger and discovery continues to shock and thrill, as it has since it was first presented to the public and heralded as 'the most amazing book ever written.'

The story begins when renowned safari hunter Allan Quatermain agrees to help Sir Henry Curtis and Captain John Good search for King Solomon's legendary cache of diamonds. Eager to find out what is true, what is myth, and what is really buried in the darkness of the mines, the tireless adventurers delve into the Sahara's treacherous Veil of Sand, where they stumble upon a mysterious lost tribe of African warriors. Finding themselves in deadly peril from that country's cruel king and the evil sorceress who conspires behind his throne, the explorers escape, but what they seek could be the most savage trap of all-the forbidden, impenetrable, and spectacular King Solomon's Mines.