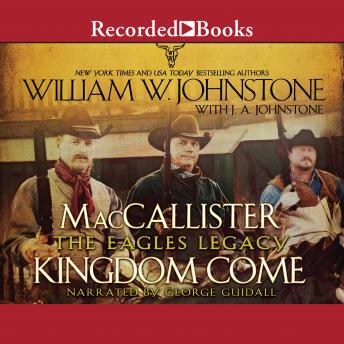 From bestselling authors William W. Johnstone and J.A. Johnstone comes a blazing new saga of Duff MacAllister. One man, forging a destiny. One legacy, sworn to justice. One name, branded in the heart of America. . . The Legend Lives!,/B The Scottish Highlands, 1885. Two men, brandishing knives, attack a young woman outside a pub. Duff MacAllister steps in and saves her--killing one of the assailants. Big mistake. The attacker was the sheriff's son, and now MacAllister is marked for death. His only hope: America. Here, in the sprawling land of dreams, Duff hopes to start a new life with his American cousins. Unfortunately, the sheriff's deputies are tracking him down--with nine of the deadliest cutthroats money can buy. Blazing a trail of blood and bullets all the way to the Rockies, Duff has to kill his enemies one by one--or die trying. But this time, Duff is not alone. He has a new ally by his side. A living legend of frontier justice. His cousin, the gunslinger known as Falcon MacAllister. . .