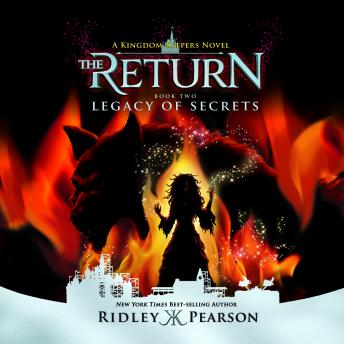 FIVE TEENAGERS OPEN A DOOR into a time and place when the legend of the Disney parks is just beginning. The five Kingdom Keepers (Finn, Charlene, Maybeck, Willa, and Philby) travel back in time to 1955 to retrieve Walt Disney's fountain pen that once saved the Magic Kingdom from destruction.

The Keepers arrive at Disneyland's Opening Day: a grand parade, numerous celebrities, and...the uninvited. There are people who want to see Disneyland fail. Who are they? And can they be stopped?

Finn's pursuit of the pen takes him to an abandoned hotel that looks uncannily like the Tower of Terror. There are secrets hidden within that hint at the origin of the Overtakers (the Disney villains who want the parks to fail).

The power of magic, the greed of men, and a puzzling set of clues spin out of control into a darkness no one saw coming. When the present meets the past, when friends are separated not only by miles but decades, when the technology that delivered you into the past is not yet able to return you to the present, what can be done to reverse things?

The Legacy of Secrets-a league of evil developed out of hatred and jealousy-is whispered of but not understood. It proves to be the greatest terror of all.

The Keepers know that ideas can't be damaged with weapons or locked up in boxes or jails, they must be countered with equally powerful ideas.

But who's going to believe a bunch of teenagers who claim to be time travelers? The Kingdom Keepers no longer face an evil born of witches and demons, but instead real, live human beings. A familiar evil-one intent on wiping the Keepers not only out of the past, but off the face of the earth. The Keepers' sole remaining hope is that friendship can conquer what an army cannot.