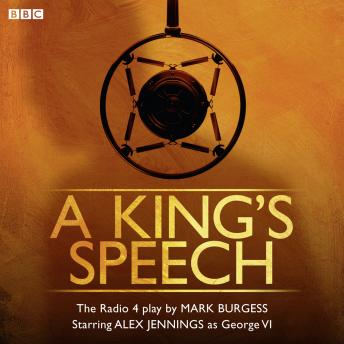 A gripping BBC Radio 4 drama about King George VI's struggle to overcome his stammer and his close working relationship with his speech therapist.It is Coronation Day, 1937. As the country celebrates, the new monarch must face one of the most difficult challenges he has ever encountered: the dreaded BBC Radio Broadcast to the Nation. Only one man can prepare the terrified King for his ordeal at the microphone - Australian speech therapist Lionel Logue. With his unconventional methods such as tongue-twisters, breathing exercises and Shakespearean quotations, and a variety of teaching styles ranging from empathy to bullying, Logue aims to give George VI the confidence to navigate the minefield ahead. As the two men wrestle with the intricacies of the speech, their conversation ranges from the Abdication Crisis to the King's childhood and his uneasy relationship with his father - and the King's dependence on and deep friendship with Logue becomes apparent. Starring Alex Jennings as George VI and Trevor Littledale as Logue, this is a riveting portrait of a prominent man at a pivotal moment in his own life and in the history of the 20th century.