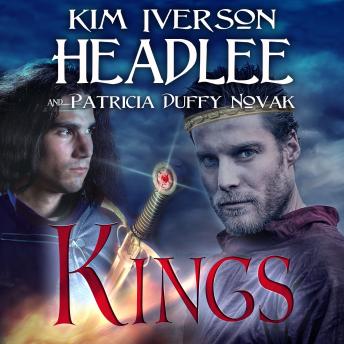 A funny thing happened on the way to the battlefield.

Arthur, High King of Brydein, must fight the last of the rebel kings to acknowledge his right to govern them all: his old nemesis, King Urien of Dalriada. Before he can lead his army to where Urien’s forces sit ensconced, however, a fey man appears from the midst of a sudden, eerie storm to block the way. The man claims to be the high king of an altogether unknown land… and he wields uncanny power the likes of which Arthur has never seen.

Garrin, High King of Helvar, steps into a patch of mist. A breath later, he’s standing toe to toe with a man claiming to be the high king of an altogether unknown land… and this warrior-king is leading an army into Helvar, wielding a sword that resists Garrin’s magic. Only, the man insists that his sword isn’t enchanted and that Garrin isn’t in Helvar anymore.

What the bloody hell—or five hells, in Garrin’s case—is a high king to do?

Their encounter reeks of an enemy mage’s dark arts, and no one is laughing.