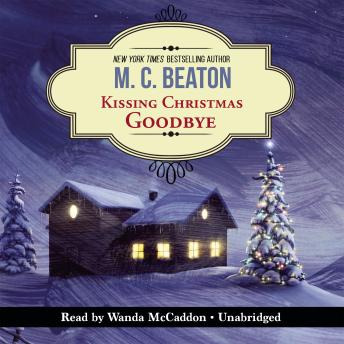 Unlike quite a number of people, Agatha has not given up on Christmas. To have the perfect Christmas had been a childhood dream while surviving a rough upbringing in a Birmingham slum. Holly berries glistened, snow fell gently outside, and inside, all was Dickensian jollity. And in her dreams, James Lacey kissed her under the mistletoe, and like a middle-aged sleeping beauty, she would awake to passion once more…

Agatha Raisin is bored. Her detective agency in the Cotswolds is thriving, but she’ll scream if she has to deal with another missing cat or dog. Only two things seem to offer potential excitement: Christmas and her ex, James Lacey. This year Agatha is sure that if she invites James to a splendid Christmas dinner, their love will rekindle like a warm Yule log. But that fantasy will have to wait for now.

A wealthy widow—who had sent Agatha a letter saying a member of her family intended to kill her—has been found dead. Now Agatha must set out to find the murderer, even though, in her heart, she’s still dreaming of a white Christmas, just like the ones she and James used to know.

“Agatha Raisin, one of Britain’s most entertaining sleuths, solves another intriguing mystery. And this cozy is anything but simple. The characters are multidimensional, the suspense complex.”—RT Book Reviews (4 stars)