Kitab At Tilawah - The Book of Recitation of the Qur’an 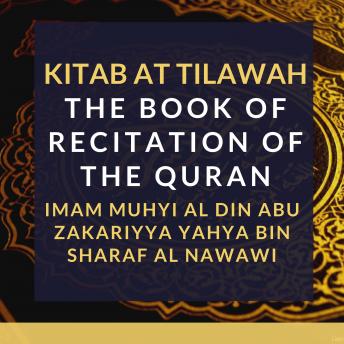 This is a translation of Kitab al-Tilawah, one of the chapters from Imam al-Nawawi’s book, al-Adhkar. It contains important information for all those are Hafizul Qur’an or are studying to achieve that, or simply anyone who recites the Noble Qur’an.

Imam Muhyi al-Din Abu Zakariya Yahya bin Sharaf al-Nawawi, for short Imam Nawawi, was born in the village of Nawa in the vicinity of Damascus in 631 A.H. (1233 A.D.). He grew up in Nawa and at the age of nineteen went to study in Damascus which was considered the center of learning and scholarship.During his stay at Damascus, Imam Nawawi studied from more than twenty celebrated teachers, regarded as masters and authorities of their fields and disciplines. He studied Hadith, Islamic jurisprudence and principles, syntax and Etymology from great scholars such as Abu Ibrahim Ishaq bin Ahmad AI-Maghribi, Abu Muhammad Abdur-Rahman bin Ibrahim Al-Fazari, Radiyuddin Abu Ishaq Ibrahim bin Abu Hafs Umar bin Mudar Al-Mudari, Abu Ishaq Ibrahim bin Isa Al-Muradi, Abul-Baqa Khalid bin Yusuf An-Nablusi, and Abul-Abbas Ahmad bin Salim Al-Misri.Imam Nawawi had endless thirst for knowledge. He used to read twelve lessons daily and wrote commentaries on every lesson. Whatever books he read, he would write marginal notes and explanations on each book. His intelligence, hard work, love, devotion and absorption in his studies amazed his teachers and they became fond of him and began to praise and admire him. Allah had also conferred upon him the gift of fast memorisation and depth of thought. Imam Nawawi made full benefit of his God given qualities and potentialities and earned the highest degree of honor. Imam Nawawi led a life of singular piety, righteousness and simplicity. After over 20 years, he returned to his hometown. Soon after his arrival at Nawa, he fell ill and died in 676 A.H. (1278 AD).

Kitab At Tilawah - The Book of Recitation of the Qur’an

This title is due for release on January 25, 2020
We'll send you an email as soon as it is available!