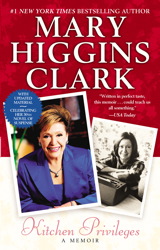 Angela’s Ashes comes home to the Bronx in a brilliant, touching, charming, and bittersweet account of a childhood during the Depression from America’s Queen of Suspense.

Mary Higgins Clark’s memoir begins with the death of her father in 1939. With no money in the house—the Higgins Bar and Grill in the Bronx is failing and in debt, and worry about it is one of the things that has killed her father—Mary’s indomitable Irish mother (she devotes a chapter to her “Wild Irish Mother”) puts a classified ad in the Bronx Home News: “Furnished rooms! Kitchen Privileges!” Very shortly there arrives the first in a succession of tenants who will change the lives of the Higgins family and set the young Mary on her start as a writer, while bringing to them all a dose of the Christmas spirit that seemed to have vanished with Mr. Higgins’s death.

Full of hope, faith, memorable characters, and warmth, Kitchen Privileges brings back into sharp, nostalgic focus the feeling of growing up poor, but determined to survive, in a vanished Bronx that was one of white lace curtains instead of a slum, and at a time when everybody was poor and either needed or offered a helping hand.