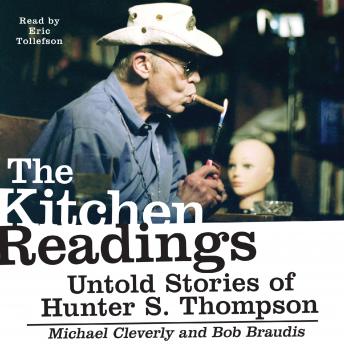 We’ve all seen the Johnny Depp and Bill Murray versions of Hunter S. Thompson--a larger-than-life madman, swilling booze with one hand and piloting classic cars with the other. But while Hunter’s legendary exploits in “Fear and Loathing in Las Vegas,” and “Hell’s Angels” and his other Gonzo tales are the public side of the man, there were very few people who were there when he let his guard down. Sheriff Bob and Michael Cleverly were there from the beginning of HST’s Woody Creek days to the fateful moment three years ago when he signed off for good.

THE KITCHEN READINGS is an intimate portrait of the private Hunter; these guys were there when the documentary cameras stopped rolling. As is the case in many less-infamous homes, Hunter’s de facto base was his kitchen--a place where he could see the TV, grab ice from the freezer, and fire off a few rounds of ammunition with equal aplomb. There he would hold court for a never-ending stream of locals, celebrities, friends, lovers, camera crews, children, and fans.

THE KITCHEN READINGS is an essential keepsake for any Hunter fan. Sheriff Bob and Cleverly bring the man to life in a way that no Hollywood film ever could.