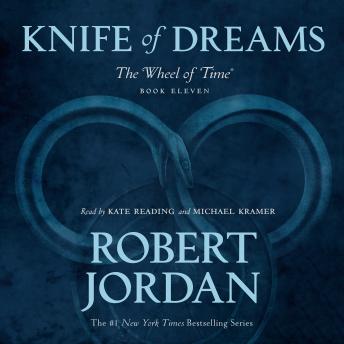 Knife of Dreams: Book Eleven of 'The Wheel of Time'

In Knife of Dreams, the eleventh novel in Robert Jordan’s #1 New York Times bestselling epic fantasy series, The Wheel of Time®, Tarmon Gai'don, the Last Battle, is upon Rand al'Thor—and now the Dragon Reborn must confront the Dark One as humanity's only hope.

The dead are walking, men die impossible deaths, and it seems as though reality itself has become unstable…

Abandoning Rand’s war against the Dark One, Perrin Aybara has made his own truce with the Seanchan in his obsessive quest to save his wife Faile from the Shaido and destroy their mutual enemies. To achieve victory, Perrin must render the Shaido Wise One channelers in Malden powerless. But even as he puts his desperate plan into action, Masema Dagar, the Prophet of the Dragon, moves against him.

Traveling with circus performers through Seanchan-controlled Altara, Mat Cauthon attempts to court Tuon, the Daughter of the Nine Moons, to complete their fateful prophesized marriage. Despite being surrounded by Seanchan seeking to kill her, Mat’s intended leads him on a merry chase while he wages guerrilla warfare to protect her.

Knowing he cannot defeat the Dark One while at war with the Seanchan, Rand brokers for a truce with the Daughter of the Nine Moons. Unaware of Tuon’s actual location, the Dragon Reborn walks into a trap set by the Forsaken Semirhage, who possesses knowledge about his powers that will either shatter or steel his resolve in the forthcoming conflict.

3rd ti.e through series and still a great story. Love how the characters voices mature as the story progresses

Such an amazing book serious. This is my third time listening to it!

high pitched action. one of the best books in the series.

fantastic series, narrators did a great job with the characters.

Another great narration, and the audio file was excellent. This book was also a refreshing return to form for the series. Much better than the previous several installments. For my full review, please check this link: https://wordpress.com/post/olivierfiction.com/2347

I really enjoyed this book, just as good as the others. This is a great series, Kramer and Reading are excellent narrators!

This is an awesome series and I love every book. I love listening to them while I drive.

This book was better than the last book in the series, but I have gotten the feeling that with each book, less and less happens and more and more unimportant and tangential characters and plots are thrown in so that the same main characters can go on and on in book after book without the story ever coming to a close. After 11 books, I plan to continue reading the series until it finally ends, but there is just way too much filler in this series.

What a great follow-up to the last book in the series, which fell flat. Everything came together and the buildup was worth the wait. I look forward to the 12th in the series in '09

Robert Jordan's tale continues. A fine story, great characters and a world without ending or beginning, yet this one feels incomplete within the confines of itself. Read the other "Wheel of Time" books and you will find more complete epics. This piece needs to be read, it just isn't as whole as the other pieces. T. V. Vessels, Jr. - author.

I read all the other books in this series so this is the first one I listened to. I really enjoyed it! There are 2 people reading which gives you some change for such a long book. I think the woman's narration is better, but both do well with the voices. It seemed to make me picture the scenes all the more. The book is one of the better ones in the series...it doesn't drag like a couple of them (such as book 5!). You really need to start from the beginning though, don't try to listen to this out of sequence.