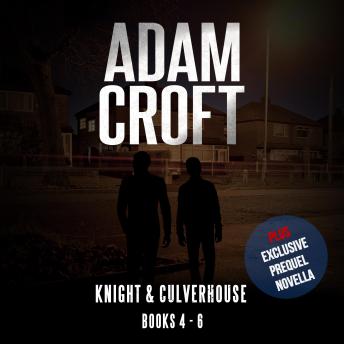 THE BLOCKBUSTING, BESTSELLING CRIME SERIES WITH MORE THAN 250,000 COPIES SOLD AROUND THE WORLD


When a man is found dead, mutilated in his house, DS Wendy Knight and DCI Jack Culverhouse soon realise that Jeff Brelsford was killed for one reason: he was a paedophile.


As Wendy does her job and tries to find the killer, Culverhouse is less keen. As far as he's concerned, this is justice.


With Culverhouse's attitude and stubbornness leaving him on the sidelines, Wendy delves deeper into the dark and murky world of Jeff Brelsford, and what she discovers is enough to shock her to her core.


Could it be that the killer was someone very close to home... a police officer?


DS Wendy Knight has endured both tragedy and pain in her short time with Mildenheath CID's murder squad. Her grizzled partner DCI Jack Culverhouse has seen it all. But neither of them is prepared for a case without a single lead.


A journalist with her finger on the pulse of Mildenheath’s corrupt underbelly is beaten within an inch of her life. With a comatose victim and a defenseless child as the only witness, Knight & Culverhouse must reveal the horrifying truth before the ruthless killer comes back to finish the job.

IN THE NAME OF THE FATHER


Father Joseph Kümmel is not just a deeply religious and spiritual man. He's the leader of a closed religious community at Hilltop Farm — one which kills members who want to leave.


When someone manages to get messages to DCI Jack Culverhouse and DS Wendy Knight about the goings-on at Hilltop Farm, they begin to uncover a web of dark deception and murderous intent. With a distinct lack of evidence and a community distrustful of the police, they’re left fighting against the odds.


The stakes are raised when their attempts to charge Father Joseph are blocked by higher powers. Will they be able to uncover the truth in time to stop his plans for a far more sinister fate for the residents of Hilltop Farm?


1981. Jack Culverhouse reports for his first day at Mildenheath CID, and quickly learns that this job isn't quite what he thought.


Left to make a crucial decision, Jack opts for the wrong choice and a dangerous criminal looks set to walk free. Needing a minor miracle to save his career from ending on his first day, Jack realises he's going to need to crack the case alone.

Adam Croft is the USA Today and worldwide Amazon number 1 bestseller of crime and psychological thrillers, with more than one million books sold to date.