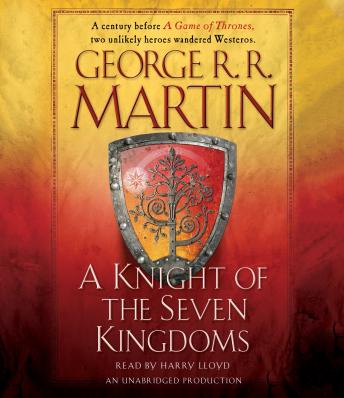 A Knight of the Seven Kingdoms

NEW YORK TIMES BESTSELLER • Taking place nearly a century before the events of A Game of Thrones, A Knight of the Seven Kingdoms compiles the first three official prequel novellas to George R. R. Martin’s ongoing masterwork, A Song of Ice and Fire.

These never-before-collected adventures recount an age when the Targaryen line still holds the Iron Throne, and the memory of the last dragon has not yet passed from living consciousness. Before Tyrion Lannister and Podrick Payne, there was Dunk and Egg. A young, naïve but ultimately courageous hedge knight, Ser Duncan the Tall towers above his rivals—in stature if not experience. Tagging along is his diminutive squire, a boy called Egg—whose true name is hidden from all he and Dunk encounter. Though more improbable heroes may not be found in all of Westeros, great destinies lay ahead for these two . . . as do powerful foes, royal intrigue, and outrageous exploits.

Featuring more than 160 all-new illustrations by Gary Gianni, A Knight of the Seven Kingdoms is a must-have collection that proves chivalry isn’t dead—yet.

Praise for A Knight of the Seven Kingdoms

“Readers who already love Martin and his ability to bring visceral human drama out of any story will be thrilled to find this trilogy brought together and injected with extra life.”—Booklist

“The real reason to check out this collection is that it’s simply great storytelling. Martin crafts a living, breathing world in a way few authors can. . . . [Gianni’s illustrations] really bring the events of the novellas to life in beautiful fashion.”—Tech Times

“Stirring . . . As Tolkien has his Silmarillion, so [George R. R.] Martin has this trilogy of foundational tales. They succeed on their own, but in addition, they succeed in making fans want more.”—Kirkus Reviews (starred review)

“Pure fantasy adventure, with two of the most likable protagonists George R. R. Martin has ever penned.”—Bustle

“A must-read for Martin’s legion of fans . . . a rousing prelude to [his] bestselling Song of Ice and Fire saga . . . rich in human drama and the colorful worldbuilding that distinguishes other books in the series.”—Publishers Weekly

The book was a great part of the story. When the main character thinks to himself the narrator is way too quiet. I have to keep adjusting my car audio. Even all of the way up it's hard ot hear some words during those moments. Otherwise all is well.

love this story, Harry Lloyd did an outstanding job narrating, only fitting that someone from the show did more work for the seven kingdoms. I once listened to this whole story driving from DFW to el paso, 10 straight hours :). 5 stars

Great stories, all three of them. I still want to know what happened to Tanselle Too-Tall... Can’t wait for the next set of stories revolving around Dunk

It is only because I play World of Warcraft that I know the knightly armor, blades, staves, etc. There is no explanation so you just have to know. However, there is an explanation of what makes good armor from bad. I do enjoy the combat, but I enjoy the relationship between Dunk and Egg more. Egg is getting bigger and a little more rebellious. I wonder if Dunk will be able to keep his squire reigned in in the next story. *The setting is the same as HBO's Game of Thrones but takes place hundreds of years earlier.

It was a simple story as compared to Ice and Fire but rather enjoyable. I enjoyed the narrator as well.

Enjoyed it! 'Twas my first audio book. Dunk, thick as a castle wall.

Awesome book, Dunk and Egg are such great characters

This book epitomizes the reason I love fantasy novels. I look forward to sequels which I hope will follow. I almost always purchase a bound copy of the book to read along as I listen to the audiobook. This makes my reading experience doubly enjoyable.

This is a very good audio book. I recommend it to anyone that enjoys Game of Thrones, but also have children that might be listening.

One of the best audio books I ever listen to and I can't wait for the series to continue. The narrator is amazing

This was one of the greatest books I've heard on Audiobooks. Between the reader and the story itself it create a vivid picture in your mind that is sure to give you plenty of entertainment. Also it give you an insight into the story and events that happened before the story in Game of Thrones. It's simply amazing.

I loved this book, but I am a fan of the entire Game of Thrones series. This book was a fast-paced, interesting prequel to a much-loved series of characters. I'm very pleased that these books finally became available to me on audiobooks.com.

Can't get enough of the 7 kingdoms. Entertaining and intriguing. Ready for more!

I am grateful that the story begins! I do not have my fill of the Seven Kingdoms even still...

Most defently a GRRM book, but I love the twist of "Egg" being one of the main characters. Iv often wonderd what his life was like before the wall. I also like how this book only has one story line, may be a great beginner book before diving in to "A song of fire and ice" for the first time.

Narrating was excellent but when the main character is thinking to himself, the audio goes quite low & gets hard to hear. The story was great & you’re transported right back to Westeros. A little lighter plot line than GoT but that’s 10hrs compared to ~180hrs

Narrator did a great job at making distinct voices for every character.

I purchased this book years ago and enjoyed. I figured it was worth re-listening to since GOT show had such a let down of an ending. I love the stories of Dunc and Aeg, I hope they don’t ruin them if they make this into one of the prequel shows.. They narration and voice acting in this is pretty good, it makes the characters seem distinct. I would highly recommend.

Totally entertaining without a doubt the best narration. I can’t help but to start over once I’m done. It’s a must have. Funny, clever and surprising plots, the best book written by RR Martin. Can’t wait for more Dunk and Egg adventures!!!!!!

****No Spoilers **** This is such a great story, and it follows two main characters on their trials and tribulations as they each grow and become the men they were meant to be. Incredible tale of chivalry, trust, honor, and coming of age. Much different than the A Song of Ice and Fire series, though it's a prequel, it focuses on our two misfit main characters as they find their calling while having adventures in ther realms of the Seven Kingdoms of Westeros, and beyond. Great history of ther Seven Kingdoms as well. Though different than the main series A Song of Ice and Fire, it's part of that world, and definitely part of what shaped the well known series as we see it today in the television show, and ther books, and if you like the books, than you'll love this. See the Seven Kingdoms and the history and splendor of Westeros and beyond through the eyes of optimistic innocence, and learn the history of the world before A Song of Ice and Fire. I can't reccomend this selection enough. This is my second run through. I read ther actual book and decided to listen this time. Harry Loyd does a fantastic job as teller of this tale.