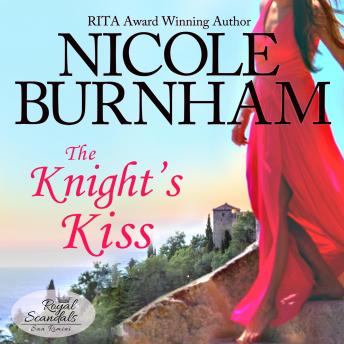 He lived in Once Upon a Time...

When Princess Isabella diTalora needs an expert to study the ancient artifacts hidden beneath the palace, she's determined to hire the best: Nick Black, a mysterious collector who knows San Rimini's medieval era better than anyone.

Nick Black knows San Rimini’s history for good reason. He lived it. In fact, he was once known as Domenico of Bollazio, a powerful knight pledged to San Rimini’s king. But he was cursed for his ambition and will never know peace—or mortality—until he can solve the riddle of his enchantment.

Nick knows modern technology will soon reveal his immortality to the world, so—despite the risk—he accepts the assignment from the princess in hopes of breaking his curse. But as he spends more time with the beautiful princess, he learns that some risks bring unexpected consequences.

The Knight’s Kiss is the fourth book in the Royal Scandals: San Rimini series. The six-book series includes:

• Fit for a Queen

• Going to the Castle