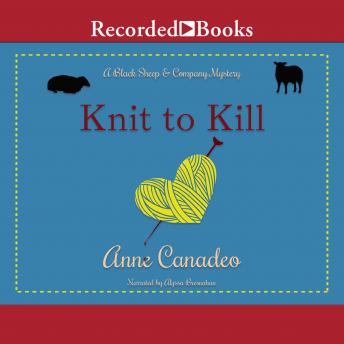 The first in a new series spinning off from Anne Canadeo's popular Black Sheep Knitting Mysteries, as four knitting friends and sleuthing heroines take some big steps in their lives. Maggie has changed the name of her shop to The Black Sheep & Co and the group is preparing for Lucy's wedding, but first there's a murder for them to solve on their girls only getaway to Maine! A relaxing girls' getaway turns deadly for the Black Sheep Knitters when a pushy killer is on the prowl. As their beloved Black Sheep member Lucy Binger prepares to tie the knot, the closely knit group decide they need a weekend to unwind before the big day. Suzanne Cavanaugh has just the spot-her friend Amy lives in a luxury New England community on Osprey Island, renowned for its famous cliff walk and spectacular ocean views, and she would be happy to host the knitters. Shortly after their arrival, however, the idyllic setting turns into a crime scene. The body of a prominent resident of Osprey Shores is discovered on the rocky coastline below the cliffs and evidence suggests his fatal misstep was no accident. The well-known victim was not so well liked, it turns out, with many enemies eager to send him into an early-and permanent-retirement. When the investigation focuses on Amy's husband, the knitters step in to untangle the clues. But with this crafty killer on the edge, the Black Sheep must walk a fine line-and look before they leap to any deadly conclusions. Story Locale: The books are set in Plum Harbor, Mass. (where the knitting shop is) and the main characters go to the fictional island entitled Osprey Island (reminiscent of Block Island, MA).