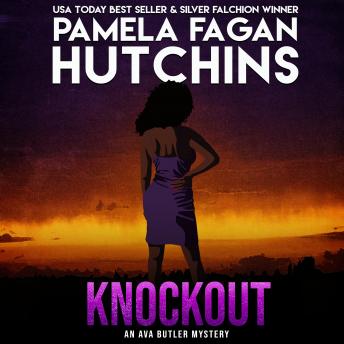 Knockout (An Ava Butler Caribbean Mystery): A Sexy Mystery from the What Doesn't Kill You Series

Does Ava have the pipes to blow the whistle on a deadly conspiracy?

'Just when I think I couldn't love another Hutchins novel more, along comes Ava.' — Marcy McKay, author of Stars Among the Dead

Everyone wants a piece of Ava’s skyrocketing star power… including her serious boyfriend and her deadbeat baby daddy. But when she visits the future site of a controversial resort and stumbles upon a dead body, Ava thinks she’s finally found a worthy cause for her newfound celebrity. Determined to catch the killer and stop the construction of the eco-unfriendly tourist trap, she plans to put her sex symbol status to good use.

Infiltrating the resort chain gala’s celebrity guest list, she teams up with a heavyweight boxer to dig up dirt on the investors. But her investigation takes a critical hit when her ex sues for full custody. Faced with the possibility of losing her daughter, she may have to give up the flirty persona she’s put to good use in wheeling out secrets from under the noses of corrupt investors.

To solve the murder and save her career, Ava must find a new way to take down the multi-million-dollar nest of corruption before her dead body joins the construction heap.

Ava has over 200 reviews and a 4.7-star average. Available in digital, print, and audiobook.

Knockout is the third book in Ava’s trilogy, a sexy spin-off from the What Doesn’t Kill You romantic mystery saga.

Once Upon A Romance calls Hutchins an 'up-and-coming powerhouse writer.' If you like Sandra Brown or Janet Evanovich, you will love USA Today Best Seller Pamela Fagan Hutchins. A former attorney and native Texan, Pamela lived in the U.S. Virgin Islands for nearly ten years. She refuses to admit to taking notes for this series during that time.