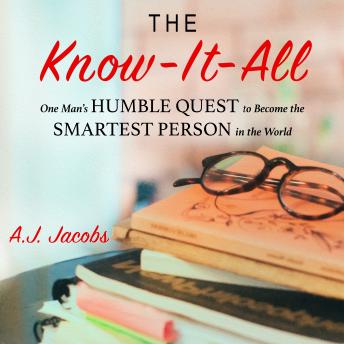 The Know-It-All: One Man's Humble Quest to Become the Smartest Person in the World (Unabridged Edition)

Part memoir and part education (or lack thereof), The Know-It-All chronicles NPR contributor A. J. Jacobs's hilarious, enlightening, and seemingly impossible quest to read the Encyclopaedia Britannica from A to Z.

To fill the ever-widening gaps in his Ivy League education, A. J. Jacobs sets for himself the daunting task of reading all thirty-two volumes of the Encyclopaedia Britannica. His wife, Julie, tells him it's a waste of time, his friends believe he is losing his mind, and his father, a brilliant attorney who had once attempted the same feat and quit somewhere around Borneo, is encouraging but, shall we say, unconvinced.

With self-deprecating wit and a disarming frankness, The Know-It-All recounts the unexpected and comically disruptive effects Operation Encyclopedia has on every part of Jacobs's life-from his newly minted marriage to his complicated relationship with his father and the rest of his charmingly eccentric New York family to his day job as an editor at Esquire. Jacobs's project tests the outer limits of his stamina and forces him to explore the real meaning of intelligence as he endeavors to join Mensa, win a spot on Jeopardy!, and absorb 33,000 pages of learning. On his journey he stumbles upon some of the strangest, funniest, and most profound facts about every topic under the sun.

This was a nerdy dad’s dream book. I loved the concept and the journey this challenge took him through. I was surprised how he moved the story along and still managed to read the entire encyclopedia. And it was fun to listen to with my teenage kids.

I didn't finish the book. I was unimpressed with this author who quite frankly seemed like a really irritating know it all who didn't know much about being a balanced human being. He seemed quirkily, tried too hard to impress people and the format was written to entertain but his dry sense of humor was too over the top for me.

This was a 'light' book. If you want to know what's in the encyclopedia, this book's for you.

This was an interesting read, although super long. I would opt for an abridged version if it exists. The author drops in many interesting, if not obscure facts and tidbits. He gets a bit long winded when discussing some of the personal interactions he has, but again, it was an enjoyable book.

It sucked. Nothing but a blow hard reading facts and telling storys of his day to day life.

Thoroughly entertaining. I related to the neurotic nature of the author. The relationship between him and his wife and him and his high achieving dad. It was funny and interesting. The reader is also very good and gives a different voice for different parts that also adds tremendously to the read. Looking forward to the subsequent chapters.

This was a great listen. It was funny and slightly neurotic. With some very touching Husband-Wife, Father-Son relationship affirming stories. Not to mention the almost fairytale National Television humbling of an arch nemesis. All this mixed in with several interesting facts from the EB. You will be laughing out loud in your car, and other drivers will thing strange things about you. That alone should make you want to listen to this one.

This book was entertaining....not only an account of the author's mission to read the EB, but also filled with fun little facts. I thoroughly enjoyed it.

This title is due for release on September 27, 2004
We'll send you an email as soon as it is available!