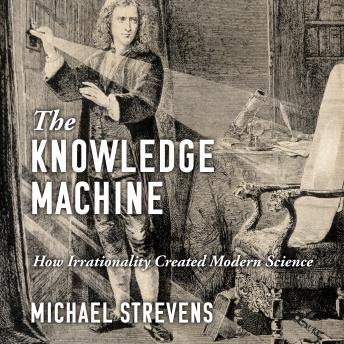 A paradigm-shifting work that revolutionizes our understanding of the origins and structure of science.

Captivatingly written, interwoven with historical vignettes ranging from Newton's alchemy to quantum mechanics to the storm surge of Hurricane Sandy, Michael Strevens's wholly original investigation of science asks two fundamental questions: Why is science so powerful? And why did it take so long, two thousand years after the invention of philosophy and mathematics, for the human race to start using science to learn the secrets of nature? The Knowledge Machine's radical answer is that science calls on its practitioners to do something irrational: by willfully ignoring religion, theoretical beauty, and, especially, philosophy-essentially stripping away all previous knowledge-scientists embrace an unnaturally narrow method of inquiry, channeling unprecedented energy into observation and experimentation.

Like Yuval Harari's Sapiens or Thomas Kuhn's 1962 classic, The Structure of Scientific Revolutions, The Knowledge Machine overturns much of what we thought we knew about the origins of the modern world.