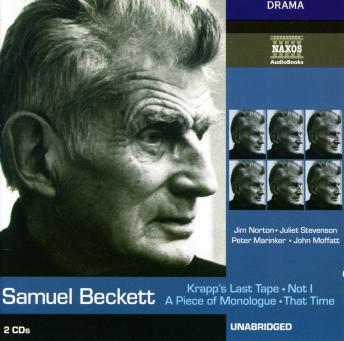 Samuel Beckett, one of the great avant-garde Irish dramatists and writers of the second half of the twentieth century, was born on 13 April 1906. His centenary will be celebrated throughout 2006 with performances of his major plays, including Waiting for Godot. Here are the two most famous plays for solo voice. Krapp's Last Tape finds an old man, with his tape recorder, musing over the past and future. Not I is a remarkable tour de force for a single actress, as a woman emits memories and fears. Also included are two other singular short dramas for single voice, That Time read by John Moffatt and A Piece of Monologue read by Peter Marinker. It follows the highly acclaimed recordings of Beckett's Trilogy, Molloy, Malone Dies, and The Unnamable published by Naxos AudioBooks.