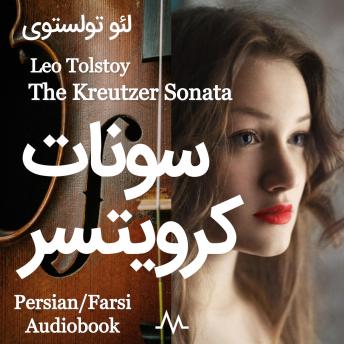 The Kreutzer Sonata is a novella by Leo Tolstoy, published in 1889. It tells the story of a man who killed his wife because of jealousy. The story begins on a train. Passengers start a conversation about the nature and purpose of marriage. Among them, there is a strange man who is nervous and uncommunicative. A lawyer on the train brings up the case of Pozdnyshev, a man who murdered his wife but was acquitted at trial. The strange man breaks his silence and introduces himself as Pozdnyshev. After that, yielding to the request of the passenger neighbour, he begins his sad story.
This version of the book is translated by Soroosh Habibi to Persian (Farsi) and narrated by Nor-Al-Din Djavadian. The Persian version of The Kreutzer Sonata’s audiobook is published by Maktub worldwide.