Krueger's Men: The Secret Nazi Counterfeit Plot and the Prisoners of Block 19 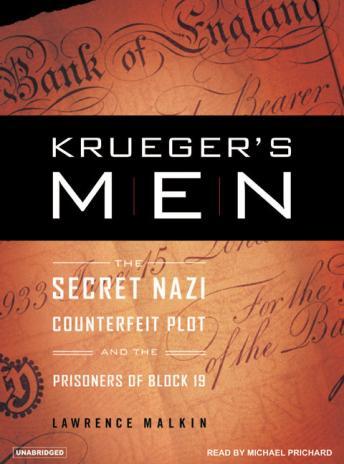 The true story of the greatest counterfeiting scheme in history and the men the Nazis called upon to help it succeed-a group of concentration-camp Jews. Only a fortnight after the start of World War II, at a meeting that has remained a secret for more than half a century, Nazi leaders and officials of the German Reichsbank approved an audacious plot to counterfeit millions of British pounds. Now, drawing upon top-secret bank records, German and British correspondence, and interrogation transcripts, award-winning journalist and author Lawrence Malkin reveals how an unremarkable SS officer named Bernhard Krueger attempted to bring down the world financial system. But when Krueger discovered that forging pounds, and later dollars, was no easy task, he made a crucial decision: he would seek out the greatest counterfeiters of prewar Europe and enlist them in the effort. He found them in an unexpected place: a Nazi concentration camp.

Krueger's Men: The Secret Nazi Counterfeit Plot and the Prisoners of Block 19