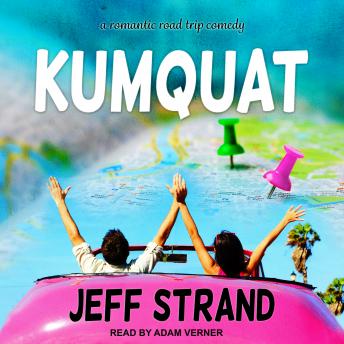 Thirty-five-year-old introvert Todd Bryan hasn't really done much with his life, and he's okay with that. Until, at a painfully bad film festival, he meets Amy Husk. She's attractive. She's funny. She's quirky. And . . . she has an inoperable brain aneurysm and not much time to live. She may not even make it to the long-awaited final episode of Exit Red, the Greatest Show Ever.

She convinces him that they should do something crazy and frivolous. And suddenly Todd, a guy who doesn't do spontaneity, is on an insane road trip from Florida to Rhode Island with a woman he barely knows, just to visit a really cool hot dog place.

Many things will go wrong. But, hey, many things will go right, too. There's a hook-handed hitchhiker and some property destruction. Maybe some sex. A kumquat will probably be relevant at some point, although not during the sex (if there is any).

A laugh-out-loud comedy, a touching love story, and a cross-country adventure, Kumquat is a story about making the most out of the time you've got.