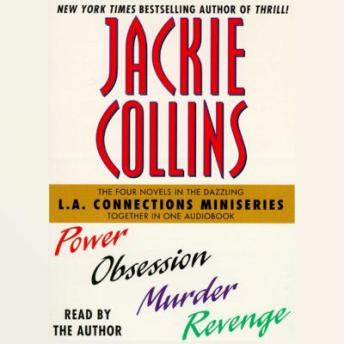 Four scorching novels in one audiobook from the New York Times bestselling author of Thrill!
Inside the exclusive mansions of L.A., where Hollywood's most powerful players willingly risk it all, a killer is playing a deadly game....Drawn into this dangerous world are a high-class call girl looking for a way out, a ruthless agent playing a high-stakes game of greed, and a beautiful journalist going after the story of her career. They are about to discover there are secrets worth killing for -- and definite rules of survival.
In a city where dirty little secrets are worth a fortune, everyone wants the inside scoop on L.A.'s rich and famous. But soon, a shocking web of Power, Obsession, Murder, and Revenge will be revealed...
Power
In Hollywood, it's not who you know. It's who knows your secrets.
Obsession
In Hollywood, it takes more than ambition to make it to the top.
Murder
In Hollywood, there are some secrets worth killing for.
Revenge
In Hollywood, living well isn't the only payback.
This special audiobook brings to life the glamorous world of Hollywood's elite -- while revealing their deadliest secrets as only Jackie Collins can!